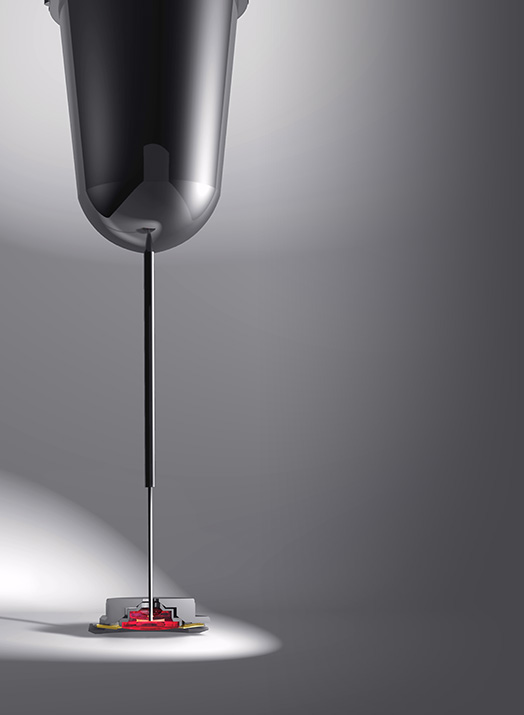 The space between the pierced jewel and the endstone of the Incabloc® shock absorber forms an “oil sump” of a specific shape and size to keep the drop of oil in the exact centre and protected from particles.

The jewels undergo an exclusive epilame coating that alters the physical and chemical make-up of the surface. This retains the oil in a compact hemisphere that prevents it from spreading.

The treatment is tested in the workshops using the “JPR Process” of Laboratoire Dubois SA and oil numbers 4, 5 or 6. The shape of the drop meeting the required quality standard of an epilame-coated surface is shown below.

Resistance to cleaning is also tested. The anti-spreading properties of the coated surfaces are retained after eight successive washings by ultrasound in a chlorinated bath.

(Lubrication done outside the watch) Unhook and lift the lyre-spring® (it can’t get lost because it is held by its hinge). Let the endstone and bushing come out. Place the drop of oil on the flat side of the endstone and cover it with the bushing. The two surfaces will adhere through capillary action and can be inserted together in the block. Bring down and secure the lyre-spring®.

(with the automatic oiler) By inserting and withdrawing the oiler, holding it at right angles to the block to avoid leaving oil traces on the walls of the balance shaft. Warning! Do not force the bushing and the endstone beyond the functional limit of their travel and do not exceed the spring’s elasticity. For added security place the endstone on a holder with a buffer stop.

General rule: the drop of oil should not exceed two-thirds of the diameter of the pierced jewel (not the endstone).